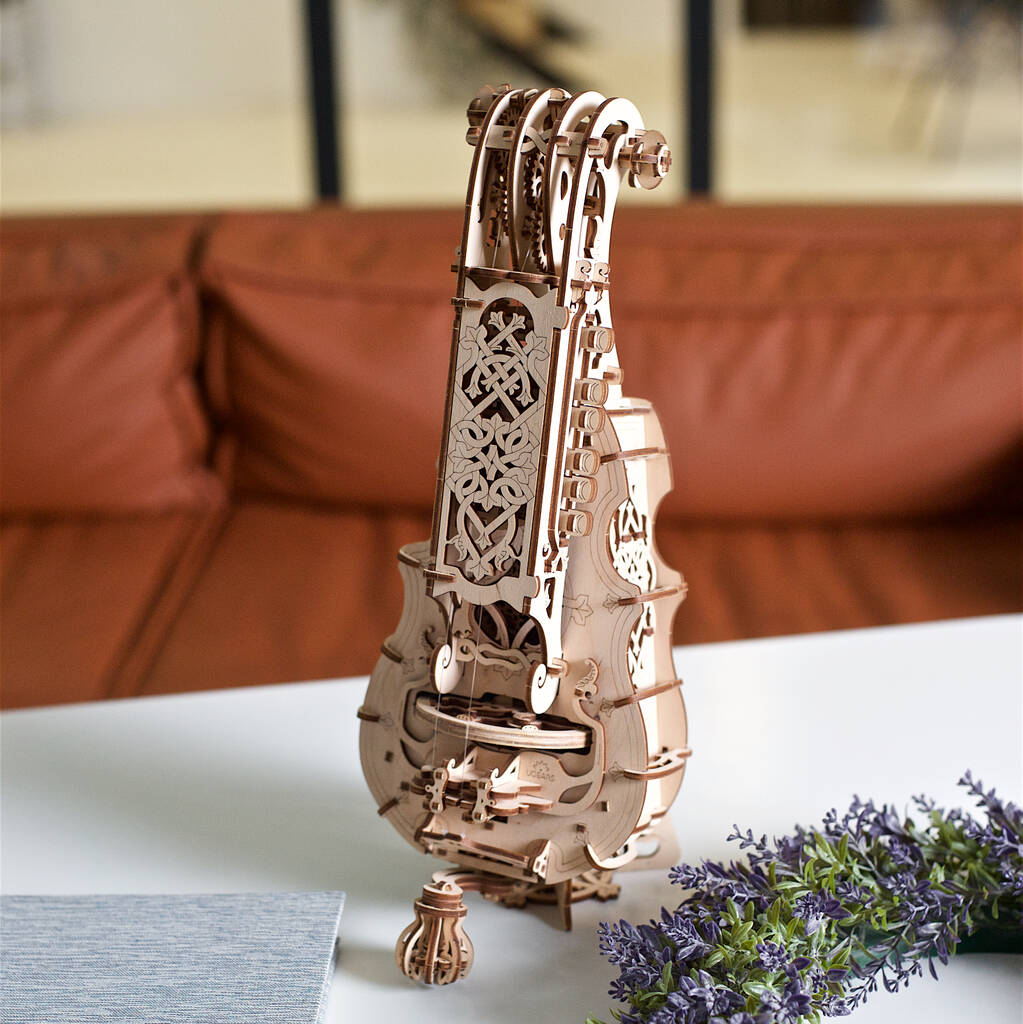 The Hurdy-Gurdy is a string instrument that produces a sound by a hand-turned wheel, working similarly to a violin.

The Hurdy-Gurdy is a string instrument that produces a sound by a hand-turned wheel, working similarly to a violin.

Part of our amazing range of unique eco-friendly plywood mechanical construction kits suitable both for teens and adults. Moving model for self-assembly with details laser pre-cut in high-quality plywood sheets which come in beautiful simple design box. When assembled can be used both as a mechanical toy and vintage-looking home decoration.

The hurdy-gurdy is a string instrument that produces a sound resembling one of a bagpipe by a hand-turned wheel rubbing against the strings working similarly to a violin and a fiddle bow.

The history of this instrument begins in the 15th century. One of the earliest forms of the hurdy-gurdy was the organistrum (a portable organ) in Medieval Europe. After some modifications, it became a common instrument among travelling musicians in England and went through its renaissance period in the later 17th-18th centuries as more of the noble class musical instrument for the amusement of the rich. Those instruments were decorated by craftsmen with inlays and carving and had the built-in hurdy-gurdy mechanism into the guitar or lute body. Some call the Hurdy-Gurdy music "a medieval rock’n’roll", which we find pretty cool. It captured us and we decided to create the Ugears' version of the Hurdy-Gurdy.

Based on the 15th Century organistrum, Ugears has created an intricately detailed, fully functional version of this medieval instrument. The finished model looks remarkably akin to the original 16th-century hurdy-gurdy , giving it a wonderfully medieval aesthetic. This wooden attractive and educational model has a highly detailed exquisite décor of the body crafted in romantic style and turns the assembly and playing process into an exciting game and brings you hours of pleasure and fun.

The Ugears Hurdy-Gurdy comes with everything needed for assembly.

No glue needed for assembly.

All parts are constructed using high quality and environment-friendly plywood that is available in pre-cut form. Just read the instructions and connect them to each other as directed in the manual.

- Suitable for 14+ (*for children under 14 an adult assistance required) - CE mark - Contains small parts that could be a choking hazard. - Contains a sharp wooden object (tooth sticks). - This item is flammable, please take care not to leave near an open flame. - Please take care to assemble this product correctly.