A unique story of history… in every bottle.

Our story began in the city of Rezekne, Latvia, where our founding brothers’ Great-Grandparents began distilling from grain. The two brothers, Vitalijs and Alex, grew up watching their grandparents growing grain and using secret family recipes passed down from generation to generation to produce fine spirits.

In 1998, they moved to the heart of the country in Stoke-on-Trent and were inspired by the city and its rich cultural heritage. Made up of six neighbouring towns and renowned as the ‘World capital of ceramics’, the area's reputation for high craftmanship appealed to their sense of perfection.

It was here that Vitalijs and Alex turned to their own heritage and began selling state-of-the-art Genio distillery equipment. Having served well over 100 distilleries across the country and armed with their extensive experience and industry knowledge, they combined their mutual love for crafting spirits with their family’s secret recipes and set out on a mission to create an artisan gin that encapsulated the refined craftsmanship of Stoke-on-Trent… and Sixtowns Gin was born.

Entrusted with family's secret family recipes, brothers Vitalijs and Alex decided each recipe should become a chapter to the Sixtowns story. Turning their distilling skills to vodka production - the first spirit their ancestors produced - and staying true to their ethos of creating small-batch, limited edition premium spirits, they developed their family recipe using the purest water, finest organic grain to create Sixtowns Triple Distilled Vodka. A smooth and refreshing vodka carefully crafted for neat sipping, use in cocktails or long drinks and made with the same passion and expertise as our gin. 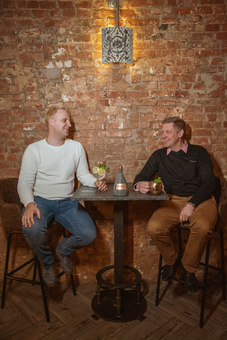 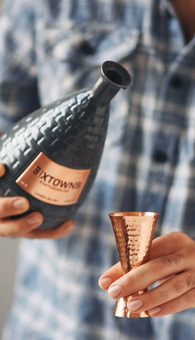