We make beer using left over artisan bread from our local Chalk Hills Bakery in Reigate. Yes, that's right, beer made from bread!

It is estimated 44% of all bread made in the UK goes to waste. That's not only a shocking waste of food but also a real waste of an artisan product that has taken so much skill and effort to produce. We saw an opportunity to do something positive for this growing food waste problem and also make some great beers at the same time!

Each of our current brews use a different type of loaf in it's recipe, so the style and taste of the beer reflects its delicious artisan ingredient. Our beers cover a spectrum from light to dark and suit all tastes.. The zesty Sourdough Pale Ale is light and refreshing. Our Bloomin' Amber is a richer lager/ale hybrid that's as good an allrounder as the bloomer loaves that make it. Finally there's our dark and mysterious Rye Ruby which folds the rich flavours of rye bread with caraway sees into a delicious warming beer. 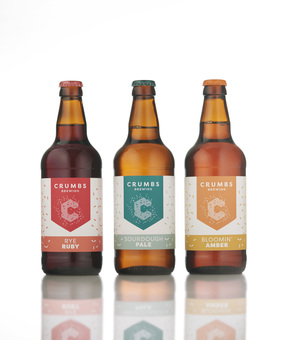 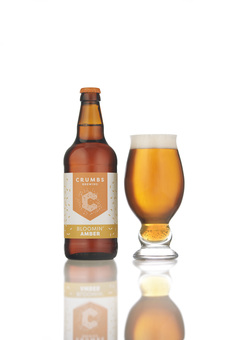 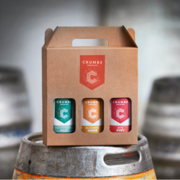 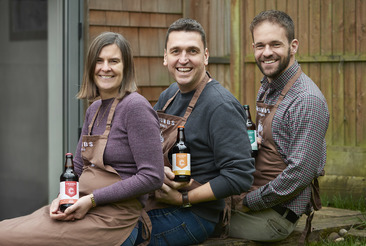 Rediscovering ancient links between the baker and the brewer

"It was while sitting in my local bakers cafe, Chalk Hills in Reigate, that I came up with the idea for Crumbs.

It struck me that so much love and skill goes into producing great artisan bread - it's such a shame so much of it goes to waste - there had to be something interesting we could do with such a great product? I soon found out it was the Egyptians that first used bread to brew with. We took this ancient knowledge and started a journey of discovery of our own. A lot of trial and error led us to a way to truly get the most out of the bread we use - getting interesting styles of beer from different types of loaf.

We finished our first brew in June 2017. Since then we've repurposed over a tonne of bread that would otherwise have gone to waste. This is just the beginning..."

Deliveries must be received by a person of 18 years or older. If our couriers are in any doubt about the age of the recipient on delivery, they will request ID. We reserve the right to cancel the delivery if the age and identity of the recipient is in doubt.

It is the responsibility of the customer to report goods damaged in transit. Our products are fragile and our couriers will do everything possible to ensure they reach you in perfect condition. If an attempted delivery is obviously damaged, you are within your rights to refuse the order, at which point it will be returned to us. If you choose to do this, please contact us and we will either resend the order, or a issue a full refund, whichever is preferable.

You must be aged 18 or over to purchase alcohol. It is an offence to sell alcohol to anyone under the age of 18 in the UK. When ordering and making a payment you will be required to confirm that you are aged 18 or over. If your order is a gift and contains alcohol, the recipient must also be aged 18 years or older. An adult over the age of 18 will be required to sign for delivery.

Alcohol is best enjoyed in moderation. Use your loaf!