The story of Twee

The National Gallery have blessed our efforts to adorn the bums of babies with High Art and have praised and sold our range of Tudor Portrait Pants. Fashion Designer Betty Jackson commissioned adult versions of this range to show under her gorgeous sheer slip dresses as the fanale to her London Fashion Week show 2016. She sells them in her London shop.

The National Theatre commissioned a range of babies underwear for their theatrical season in 2013.

The V&A exhibited our childrens' clothes as part of an exhibition to fight gender stereotyping, and are now in their permanent collection.

Our Portrait Pants have been commissioned by the BBC, Channel 4 and ITV and have appeared on Ian Wright in The Wright Stuff, on the bottom of Barak Obama on his election night and on Alan Titchmarsh in Ground Force.

Boris Johnson, Gordon Brown and David Cameron have all been bought their own Political Pants by their wives. Nigel Farage was given his by a saucy pub landlord(!?) 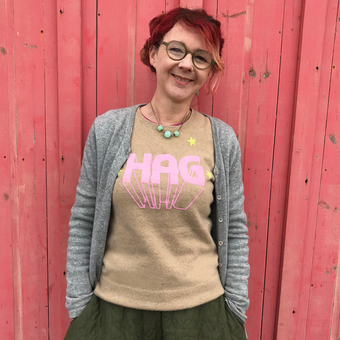 Twisted Twee in the Media

Read all about it!

Our Election Baby Races have been featured by Guilty Pleasures host Sean Rowley and BBC Radio London host Robert Elms. Russian TV interviewed us for our predictions of the 2017 election based purely on how many pairs of pants we’d sold of each candidate.

We’ve caused column acres on MumsNet, Buzzfeed, Huffington Post, Jezebel, SwissMiss and a hundred chatrooms regarding some of our more polarising designs with comments ranging from ‘Genius’ and ‘Hilarious’ to ‘They should be chemically castrated’. We have been interviewed / interrogated on Women’s Hour, the Tyra Banks show in NYC and BBC Ireland and made it simultaneously into Buzzfeed’s Top Ten Most Inappropriate Children’s Gifts and the Top 100 Best Brands of 2015.

Our homeware items can be found at notonthehighstreet.com/partners/twistedtweehomewares/products

Although we make every effort to ensure that products are sent out within 2-5 days of the order being placed, all delivery dates provided for non-express orders are estimated and not guaranteed. If a guaranteed service is needed, then we recommend using special, and next day delivery. Otherwise our orders go out with 1st class royal mail and although they usually deliver within two days, delays can occur which are beyond our control. We would please ask that you bare this in mind when ordering and are aware that delivery dates provided by the NOTHS website are an approximation. Having said that, most orders are dispatched quickly and arrive promptly.